As H. Jackson Brown wrote in Life’s Little Instruction Book, “Nothing is more expensive than a missed opportunity.” Climate change offers us the eco opportunity of all time—the opportunity to save our planet. So …  what are we doing about it? 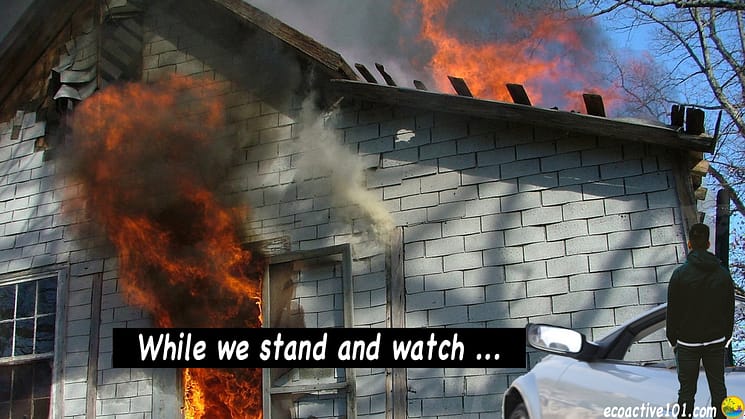 Here’s a “What-If” for you: Imagine you’ve just turned the corner on your way home from work, only to meet the horrifying scene of flames shooting out the front windows of your house. You screech to a stop. The back door appears to be free of flames and smoke, and quick thinking tells you there’s a chance you can still rescue your spouse, your kids, and the family dog.

What do you do? Sit dazed by the flames, munching the chips you just bought? Go chat with a neighbor? Call and invite a friend for a walk?

No! You take action. Call the fire department? No, forget that—you brave the flames, dash in the back door and drag them all out by their hair, if need be.

Not a Theoretical Question

If this seems like a theoretical question, it is not. Your house—your planet—is on fire. And everyone you hold dear is in jeopardy.

But is that where your attention is focused? For most people, it is not. We are in denial, nearly all of us, to one degree or another. Even if we’re not denying climate change or that human activity is at cause for it, we remain nonetheless oblivious to our individual and collective responsibility to take immediate steps to control it. While our house burns.

And yet, this fire is offering us the eco opportunity of a lifetime.

Back in 2018, Greta Thunberg took on the UN and the US government. Of course, we applauded her for her tremendous courage. Yet come morning, our lives returned to business as usual.

Why? What is it that keeps us from picking up the fire hose? Is it because we’re not trained firemen, and the extinction fire is just too freaking scary to face?

So we go into denial.

If you’ve read this far, you are clearly not a climate denier. You’re alert to the flames.

And Still We Hesitate

Every IPCC Report has told us that our eco opportunity is limited, that we have a short window of time to get more eco-friendly and turn that around. On top of that, scientists continually report that the damage is happening a lot faster than they expected. Yet we’re not doing what it’s going to take to keep warming under the 1.5- or even 2-degree target.

We suspect we could still save the earth, but we’re not sure. Therein, I suspect, lies the seed of our denial.

We are not shouting from the rooftops. And we’re not stepping out of our comfort zone to put out the fire.

How Bad Is Climate Change, Really?

“Elsewhere around the world, lack of water is a leading cause of death and serious disease and is contributing to crop failure.

“At the opposite end of the spectrum, heavier rains cause streams, rivers, and lakes to overflow, which damages life and property, contaminates drinking water, creates hazardous-material spills, and promotes mold infestation and unhealthy air.

“A warmer, wetter world is also a boon for foodborne and waterborne illnesses and disease-carrying insects, such as mosquitoes, fleas, and ticks. Today’s scientists point to climate change as the biggest global health threat of the 21st century.”

Our Response to the Climate Change Threat

FACT: Let’s compare our reaction to climate change to our response to Covid.

The Chinese first told the world about the virus on December 31st, 2020. By March of 2021, the US White House had issued more than twenty health-related executive orders.

How Do We Know CO2 Is To Blame?

Scientists use a vast array of tools to study the changes in the Earth’s temperature since the last Ice Age. These include evidence from ocean sediments, ice cores, tree rings, sedimentary rocks and coral reefs.

The evidence thus collected shows “that the current warming is occurring 10 times faster than it did in the past when Earth emerged from the ice ages, at a rate unprecedented in the last 1,300 years.

“To understand this rapid change in climate, scientists look at data sets and climate models to try to reproduce the changes that have already been observed. When scientists input only natural phenomena such as the sun’s intensity, changes in the Earth’s orbit and ocean circulation, the models cannot reproduce the changes that have occurred so far.”

The Biden Administration took a major step toward solving climate change in August, 2022. But even the Inflation Reduction Act leaves the oil companies a lot of wiggle room. And it’s not just the oil companies that have to change. Our agricultural, transportation, travel, construction, and forestry industries need to make vast changes as well.

Big changes need to take place all around, and one way to help that happen is to change how we each interact with those industries.

Indeed, the task of saving our earth home is up to US. All of us. Since we and our loved ones are the ones who will—or won’t—survive, we can’t afford to sit idly by.

That means YOU. And ME. It’s why I wrote this article.

Because we still have a chance to succeed—if we take bold action. Not next year, but NOW. How? Find out about all the many things you can do NOW to be part of the solution.

Want to make a bigger difference than you’re making now?  It might just be worth the effort. It can even be fun, especially if you get your friends together in a friendly competition. Here’s a list of 38 things you can do immediately to help save our earth home. Or maybe you’d prefer these three eco cheat sheets?