Michael Moore has long been one of my social heroes. What I’ve loved about his films has been their unique thought-provoking quality. I’ve always come away stimulated to come up with creative solutions.

Not so when I saw his new documentary, Planet of the Humans. Unlike his previous films, this one just leaves you feeling depleted, numb. Narrator/director Jeff Gibbs alleges a number of serious failures within the green movement, but one wonders how many of his claims will fall flat in the face of close scrutiny. And the film is a colossal failure when it comes to inspiring a search for solutions. That’s pretty counterproductive at a time when what we need are more creative energy storage solutions. 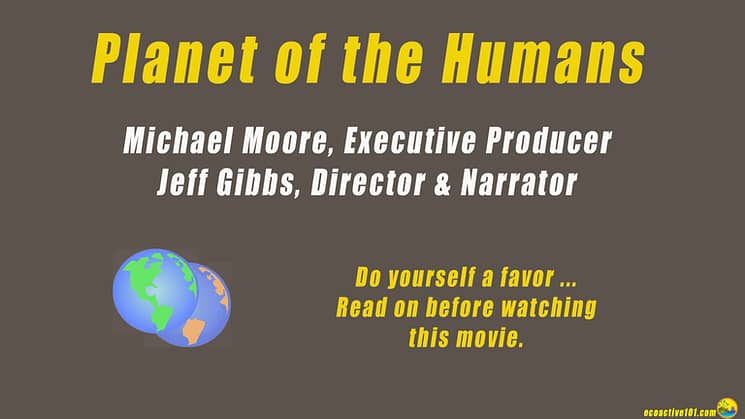 The movie zeroes in on solar and wind energy, using typical Michael-Moore-type off-the-cuff questions to point up the major shortcomings of these two renewable energies—namely, that sunshine and wind are not always available, that solar panels and wind turbines wear out and need to be replaced, and that the materials used in their construction either come from or are otherwise dependent upon fossil fuels.

Though these are real problems, Gibbs’s treatment of solar glosses over recent improvements in photovoltaics and battery storage. And, according to PV Magazine, the leading magazine for the solar trade, the solar systems examined in the film are some eleven years out of date.

Gibbs then moves into an indictment of electric vehicles with the argument that the power to charge those batteries comes for the most part from fossil fuels. (That is not necessarily so—you can charge your EV with solar energy—but then we’re back to the question of what goes into making those solar panels.)

After relieving us of any hope we may have entertained that solar and wind are going to save us from climate change, the film switches to a focus on “green” banks, accusing them of presenting an appealing renewable energy front that hides a seamy fossil-fuel-based biomass understory.

Gibbs claims we’re being lied to by the major players in the green movement, specifically by Sierra Club Executive Director Michael Brune, 350.org co-founder Bill McKibben, Al Gore, and “green” capitalist Michael Bloomberg, all of whom have helped build and maintain our optimism about renewable energy’s ability to meet our needs. He’s telling us they’ve actually been in covert collusion with the fossil fuel industry.

Can this be so? Somehow I doubt it. Yes, they’ve tried working with the fossil fuel companies to get them to green up. And although they haven’t really succeeded at that, they have had some huge successes, particularly in instigating the closing of coal plants. We all need to work together on this.

My primary issue with the movie, now that I’ve recovered somewhat from its numbing effect, is that its only suggested solution for keeping the planet livable is … population control. Gibbs leaves the details up to our imagination.

Yes, population is an issue. But it’s far from the only issue or the only solution. And just throwing that statement out as he does without taking a stand on how to limit population—through Planned Parenthood, forced sterilization, war, or planting deadly diseases?—plays (wittingly or unwittingly) directly into the hands of right-wing fanatics, who are having great time applauding the film right now.

Clearly, overpopulation of the planet increases energy demand. But the major culprit with regard to climate change is not population growth so much as our overly consumptive society, egged on by irresponsible industries more than willing to forego sustainability in the name of profits and aided and abetted by an Administration that’s moving at jet speed to destroy our hard-won environmental protections.

There are glaring holes in Gibbs’s coverage. He didn’t mention hydroelectric—which he would probably pan with the argument that dams destroy rivers. He also failed to mention harnessing geothermal and hydrokinetic (ocean wave) power.

Concerning solar: Solar panels do NOT have to be replaced every 20 years. “A solar panel has two warranties: a performance and equipment guarantee. A solar panel’s performance warranty will typically guarantee 90% production at 10 years and 80% at 25 years. An equipment warranty will typically guarantee 10-12 years without failing” (quote from https://news.energysage.com/shopping-solar-panels-pay-attention-to-solar-panels-warranty/). Most solar panels that have been up for 40-60 years are still functioning. A 2012 study by the National Renewable Energy Laboratory cites the average degradation rate at 0.5% to 0.8% per year, so after 60 years a panel can be expected to operate at 52-70% of its original efficiency.

I kept waiting for Gibbs to switch his focus to nuclear energy. But he didn’t. I have always opposed nuclear, but working next-gen nuclear into the mix—see Mike Conley and Tim Maloney’s well-researched book, Roadmap to Nowhere—might be preferable to relying on coercive approaches to population control.

The main problem with nuclear energy, as I see it, is that Congress has abdicated regulatory responsibility for it, leaving the industry to regulate itself. And the industry has shown itself to be far more interested in profits than in public safety. If that flaw could be fixed, nuclear waste storage could be made safer. From what I understand (mind you, I’m not a nuclear expert), Gen-4 nuclear plants will produce far less radioactive waste, be configurable to run on “spent” fuel, and be immune to meltdown—when they come on line, which, unfortunately, is likely to be decades from now. In the meantime, if we end up going with nuclear, we must insist on industry-independent oversight to make sure the radioactive waste is properly handled.

The fact is, every solution has its downside. But we have to do something, and Gibbs’s approach suggests that that something might as well be fossil fuels. Which is no solution at all.

We invite you to join us in expanding awareness of innovative solutions. Teamwork gives you clout, and our team is fun to work with—for both kids and adults.

Might there be possibilities not even touched on in this movie? Absolutely. For example, regenerative farming—a concerted move away from the monoculture farming that has devitalized our soil and turned the ground from carbon sink to carbon emitter—has huge potential for lowering carbon emissions. An entirely different approach  focuses around taking action to make our clouds more reflective, so that less of the sun’s heat will be absorbed. (As Einstein said, “we cannot solve our problems with the same level of thinking that created them.”)

And then there are approaches we know about but haven’t tried yet—like, how about taxing the 1% so heavily on their carbon output that they’re incentivized to finance more research into energy storage?

And then there are approaches designed to motivate all of us to make needed changes. How about televising reality shows that explore ways to simplify our lives? Contests that de-incentivize consumerism? Bloomberg could fund the PR for them.

How about legislating a living minimum wage, say $20 per hour, so families don’t need two wage earners and so many labor-saving devices? Oh no, am I actually advocating going against “progress”? Maybe, if that’s what it takes. Better to have to wash clothes using a hand swisher than to resort to killing off select groups of people (never the rich!), don’tcha think?

What would happen if we were to implement some of Elizabeth Warren’s ideas for reducing corruption? I agree with her: that is the core global issue.

How about establishing more responsible regulation of the nuclear industry, as suggested above?

And finally, what about a national campaign focusing on love and service to others? That might actually get us to the one and only real solution, touched on half a century ago by the Beatles: “All we need is Love, sweet Love.” In today’s materialistic society that’s a message that falls on deaf ears. Presidential Candidate Marianne Williamson didn’t stand a chance. Well … maybe our society as a whole is in need of spiritual hearing aids.

Come explore some of these approaches with us, as part of a team of families and individuals committed to learning and taking action together!

Others have voiced other reasons for being less than pleased with this movie. Reviewer Brian Kahn says, “The film doesn’t interview any of the new wave of environmental leaders who see the fight against these injustices and the climate crisis as intrinsically linked. It’s too bad since that’s a message Gibbs—and the rest of the world—need to hear now more than ever.” I agree.

And Electrek.co reports, “Josh Fox, the director of Gasland, led a campaign to have the film taken down and for Michael Moore to issue an apology … Two days later, Fox said that the film’s distributor agreed to take it down. But the direct-to-YouTube video remains online, clocking more than 1.5 million views by the end of the week. (Update: The views are approaching 1.9 million by Saturday morning.)” Electric.co also reports that Fox called the film “unsubstantiated, unscientific, poorly made piece of yellow journalism which attacks proven renewable energy and science.”

In conclusion, I am deeply disappointed in my former hero Michael Moore for allowing the release of a film in which the director appears to have ended up so overwhelmed by his interviews that he concluded by letting the corrupt off the hook and dumping the burden on the rest of us with the unfortunate suggestion that the solution is … population control.

Do I recommend you see the movie? Yes, It raises important questions. But see them as questions, not as indisputable conclusions. Go emotionally forearmed, knowing you don’t have to let it knock the wind out of your sails.

We humans are really creative beings … which of course is how we got into this sustainability conundrum in the first place. What we need now is responsible reporting based in verifiable research into the interface between the fossil fuel industries and the renewables industries.

Is it still possible we can put our heads together and pool our creativity to pull ourselves out of the climate crisis?

One thing we know for sure: If we don’t make the attempt, it won’t happen. And that would be a shame of unimaginable proportions.